October 25, 2018
Share to FacebookShare to TwitterShare to LinkedInShare to PinterestShare to EmailPrint this page

As the Nicolet National Bank Triton Scholar of the Month, Darling will receive a $50 gift. Nicolet Bank has also generously donated $2,500 to NDA to continue to support the academic successes of its students. 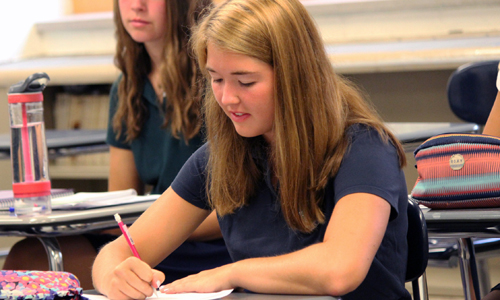 - Read Darling's Triton of the Week story below -

Darling has been chosen for the positive example she sets for her peers and for the dedication she has to the community. "Madeline is a positive example for her peers," said Mrs. Qiuhong Zhang, NDA Mandarin teacher. "She is not afraid to ask questions, meticulously reviews all study materials leaving no stones unturned, and makes admirable efforts instead of taking shortcuts."

Achieving the high honor roll all four years of high school, she has led a balanced life of academics, athletics, and volunteerism. Voted as the captain of the girls tennis team her senior year, Darling made state appearances during her junior year and was named first team all-conference each year of her high school tennis career.

"One of my favorite things about Madeline is the dedication and leadership she demonstrates on the tennis court, which translates into the classroom and community," said Ms. Kimberly Uelmen, admissions & marketing/communications manager at NDA. "She is a definite spark of light in our school community."

Darling is a member of the Chinese Club, ASTRA Service Club, and Math Club. She has also volunteered her time as a Miracle League Buddy helping children with mental and physical challenges to play baseball. She has also participated in multiple NDA and community mission trips, and has spent her summers working as a nanny for local families.

"Madeline has a strong sense of duty and teamwork," said Zhang. "As an active Chinese club board member, I have seen her work ethic and effectiveness at club events, for example, by organizing and helping the Chinese New Year celebration party run smoothly, while voluntarily staying afterwards to clean up."

Darling hopes to study nursing, architecture, or business at a four-year university, and she can be found this fall on the tennis court at NDA.