October 18, 2018
Share to FacebookShare to TwitterShare to LinkedInShare to PinterestShare to EmailPrint this page

Nominated by Mr. McGowan, learning resource specialist, Linares has made great strides throughout the year, including becoming a mentor to a young man in the current freshman class who is trying to find his way.

"When Rigo came to NDA as a freshman, he had the mindset that NDA may not be the place for him," said McGowan. "This past week, though, Rigo came into our Freshman Seminar class to speak about the importance of doing all classwork, listening to teachers, and taking education seriously." 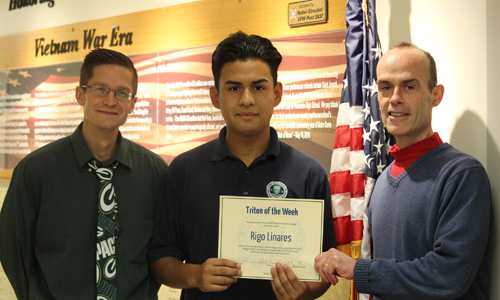 Linares has come to embrace NDA as a place for him and a place where he can thrive. In fact, when McGowan announced to Linares in front of his biology class that he was Triton of the Week, the entire class erupted in cheers and applause.

Would you like to nominate someone to become Triton of the Week? Make your submission today.