November 1, 2018
Share to FacebookShare to TwitterShare to LinkedInShare to PinterestShare to EmailPrint this page

Achieving high honor roll each semester of his high school career, Van Straten has not only placed a strong focus on academics, but on the community, as well.

He joined Boy Scouts of America in 2006 and achieved the Eagle Scout Award in 2017, was one of 40 sophomore students to be part of the Brown County Teen Leadership program, and was the Wisconsin Delegate for the Congress of Future Medical Leaders at the University of Massachusetts.

"Theo is an amazing young man, not only because of his accomplishments and intellectual capacity, but also because of his character. Theo is genuinely interested in others. It is because of his compassionate soul and ability to connect with others in an authentic and mature way that he will succeed. One can have all the knowledge in the world, but, without love, it is nothing. Theo has both," said Ms. Becky Bain, college counselor. 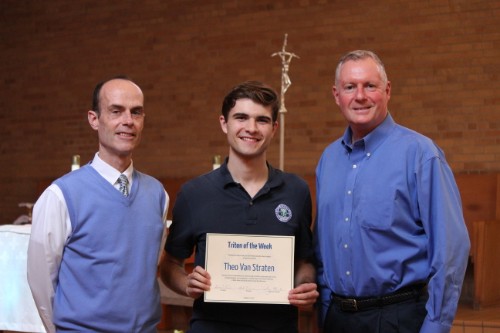 At NDA, he has accrued more than 200 service hours, belongs to student senate, and founded Bringing Kids Tools for the Mind, a mobile workspace for the Einstein Project bringing impactful and interactive STEM learning to kids across the state. In support of this effort, he raised $20,000 and biked across the State of Wisconsin.

Finally, he has found passion for music. A piano and saxophone player, Van Straten is a member of the wind ensemble, jazz band, and pep band at NDA. He also participates in drama club and the spring play.

Van Straten will attend a college in the fall and plans to pursue a career in medicine.