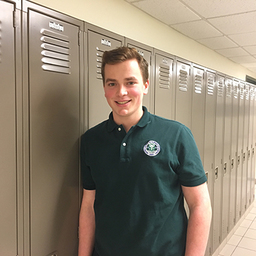 Guyette has had about a handful of students who have decided to write their IB extended essay on the subject.

Ben Zabriskie is one of those rare students to do so.

“Thousands of kids write a history extended essay,” Guyette said. “But only a few write a math extended essay because they either don’t like it or are afraid. It reflects his courage that he would even choose to do that.

“Ben is the kind of kid that isn’t satisfied phoning it in. There was an area where he was a little foggy and he wasn’t OK handing it in that way. He needed to understand and describe it better. It gives you a sense of his ambition and striving for quality.”

For his efforts, Zabriskie is the Triton of the Week for the week of Jan. 27.

Zabriskie has always been good with numbers.

The one he saw when logging into Naviance from the school parking lot earlier this month is probably the most telling about him.

Next to his name for class rank was the No. 1, meaning he’s on pace to be the valedictorian for the Class of 2020.

“It’s just a byproduct of trying to work hard in my classes and learn to do well,” Zabriskie said. “My goal necessarily wasn’t to be valedictorian. It just kind of worked out that way.”

Zabriskie balances his hard work in the classroom while being a member of the soccer and tennis team. He’s also the vice president of the Model UN Club and is one of the co-founders of the Computer Science Club.

“He’s the kind of student who isn’t just intelligent, but is hardworking and also respectful,” Guyette said. “He’s an all-around good human being.”

Zabriskie wants to study aerospace engineering in college. Teachers like Guyette have challenged him to shoot for the stars in pursuing his goals.

“The teachers have been really good,” Zabriskie said. “They definitely really care about their students and are willing to help you as much as you need.”