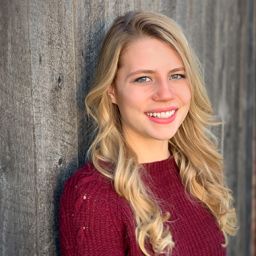 That’s all Sydney Ditscheit wanted to do when she set out to make her first tie blanket a few years ago for American Family Children’s Hospital in Madison.

The Notre Dame Academy senior never envisioned her simple act of kindness would grow into.

“I originally just wanted to make a couple blankets for that hospital, but it grew into a lot more,” said Ditscheit, the Triton of the Week for the week of May 11, 2020.

Ditscheit has spearheaded an effort that has made more than 100 tie blankets through the organization Blankets for a Better Tomorrow, which was recently awarded first place in the district as a service award entry by NDA’s ASTRA Club.

The award gives NDA’s ASTRA Club an entry to the International Convention being held in July 2021.

“I’m really happy and I’m excited for the club and glad I got to help them out,” said Ditscheit, who is the president of NDA’s ASTRA Club after previously being vice president as a junior.

“It has been a lot of fun taking on these leadership positions and being able to coordinate outreach events to help other people go out and volunteer as well.”

Ditscheit has been determined to help others ever since she received a blanket after being airlifted to American Family Children’s Hospital following a UTV accident in 2016.

She takes great solace in knowing Blankets for a Better Tomorrow will continue at NDA in the future and has expanded to giving adults battling cancer blankets as well.

“It has become my little child,” she said. “I’ve had a lot of fun working on that project.”

In addition to her volunteer efforts, Ditscheit is a National Honor Society student that was a captain on the cross country team last fall. She also helped found NDA’s Life Guards Club and has served as a Eucharistic Minister at school Masses.

Ditscheit, a recipient of an Altrusa International Foundation scholarship, will study communications and run cross country at Ave Maria University in Florida.

She is thankful for all the opportunities and friendships she has developed during her time at NDA.

“I prefer the faith aspect that I get to live out my faith in my school and not have to hide it or suppress it,” Ditscheit said. “Specifically, the service opportunities that we can combine faith and service at our school so well that I can go out and serve others and my community without it being a secular thing. It has been a blessing.”