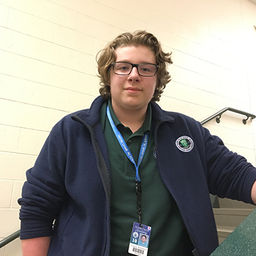 A few years ago, Connor Willadsen didn’t think he would be attending Notre Dame Academy.

To be fair, Willadsen didn’t know he would be living in Northeastern Wisconsin, either.

The NDA sophomore grew up in Michigan before his family moved to Illinois when he was in fifth grade and then to Wisconsin when he was entering eighth grade.

Moving can be difficult for anyone, but Willadsen has taken it in stride as it has helped make him a stronger person.

“If you don’t like it, that’s fine because you learn if it’s not for you. I learned just to talk to people.”

Knowing what it’s like to be in a new environment, Willadsen has gone the extra mile in helping a freshman student with his studies this school year.

“Connor has taken him under his wing and is making sure he helps him and tutors him,” said Mrs. Kathryn Bialk of Student Services. “Connor doesn’t think anything of it. He just does it because it’s the right thing to do.”

One constant in Willadsen’s educational path has been attending Catholic schools. He attended St. John the Baptist in eighth grade before enrolling at NDA.

Willadsen is part of the Game Club and is looking forward to competing on the lacrosse team again this spring.

“There is just something about being out there,” said Willadsen, who plays defense. “There is so much activity there. It’s just a great sport.”

Willadsen would be interested in pursuing video game design one day, but is still exploring all the different career paths available.

Science has become his favorite subject this year.

“Mrs. Mayer really boosted that,” he said. “I like her format and how she does stuff. We do labs to use what we learn and put it into our hands.”