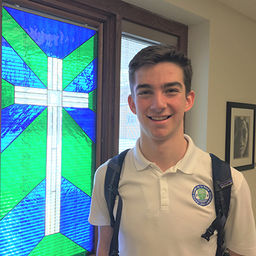 Matthew Schumacher has been building model rockets for as long as he can remember.

The Notre Dame Academy junior attempts to shoot for the stars in everything that he does.

It’s that type of mentality that makes him such a positive role model in the community.

From being a Commander of Bravo Flight in the Civil Air Patrol to volunteering at a local homeless shelter, Schumacher strives to serve as a leader and be a strong representative of his faith.

“The credit definitely goes to my family for kind of planting that seed,” said Schumacher, who is the Triton of the Week for the week of Feb. 17, 2020.

“I’ve been blessed. My family has brought me up and really providing a good environment for me to be the person I want to be. They didn’t really force the faith on me. … They let me find that on my own. I think that’s what helped me to have the faith life that I have.”

The National Honor Society student has a wide variety of interests.

Schumacher is a member of Campus Ministry, runs on the cross country team and will be a part of the trap team this spring.

“It doesn’t matter what the day is or what’s going on in his life, he always seems as positive as he can be,” Math Teacher Doug Guyette said. “He just carries himself really well.”

Schumacher recently started learning how to play the guitar and will start performing during Masses at St. Matthews.

Meanwhile, his passion for aerospace has remained strong since his youth and is part of the reason he joined the Civil Air Patrol a few years ago.

“There are a bunch of different routes you can go, which is the cool thing about it,” said Schumacher, who leads a squadron of about 10-20 cadets. “I’m pretty focused right now on the leadership part.”

Schumacher can see himself pursuing several different avocations or careers in the future, including seminary, aerospace engineering, counseling and accounting.

“It would be cool to be a counselor or chaplain for NASA, combine all that stuff together,” he said.

Schumacher relishes opportunities, and he’s thankful for the ones he has at NDA.

“The best thing about NDA are the opportunities for faith,” Schumacher said.

“Whether that be morning Mass or Rosary or Chapel after school or serving in Campus Ministry, you can’t get that at any other school. I take comfort in knowing that if I’m having a bad day I can go to the Chapel during lunch and decompress. I’d say that’s probably my favorite part about NDA, the opportunities.”