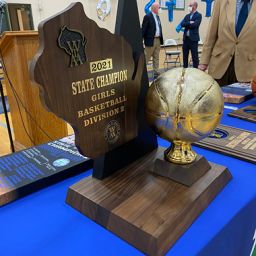 Notre Dame Academy held its first pep assembly of the school year on March 24 at the Schneider Triton Center.

The socially distanced gathering was attended by the Class of 2021, while the juniors, sophomores and freshmen watched a live stream on YouTube from classrooms on campus. The band also performed before and after the assembly.

Green Bay Mayor Eric Genrich was in attendance and dedicated the day to the NDA girls basketball team for their achievements this season. Genrich is a NDA Class of 1998 graduate.

The girls basketball team won its fourth WIAA state championship in program history and first since 2014 this season.

Watch a replay of the pep assembly