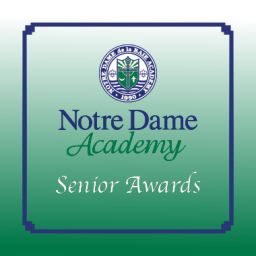 The Senior Awards are an annual tradition at Notre Dame Academy to recognize the achievements of individuals in the graduating class.

The event will be held virtually this year and split up into 15 days with a new video being posted each day.

A new award, the Harold Geiser Family Math Award, has also been created this year in recognition of Harry Geiser's retirement following 54 years of teaching at Premontre and NDA.

Please join us in celebrating the Class of 2020 and our Seniors’ accomplishments.

Our Lady of the Bay Awards

NDA Scholarship for the Arts

Above and Beyond Awards presented by Patrick Browne